Today I am really excited to introduce you to Brittany Matsen, author of The Weapon of Fire and Ash series!

I've had the privilege of getting to know Brittany both personally and through her books. Her debut novel The Mark of Fallen Flame was one of my favorite reads of 2019! She is an incredibly talented author with a beautifully descriptive style of writing. She writes protagonists you can't help but root for, bad guys you love to hate and bad boys you love to love ;).

She has currently released book three in The Weapon of Fire and Ash series, but don't worry there are no spoilers in this interview. 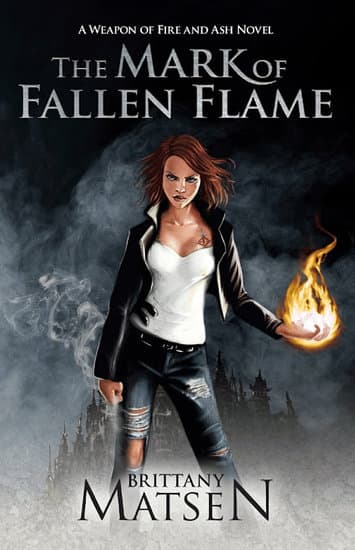 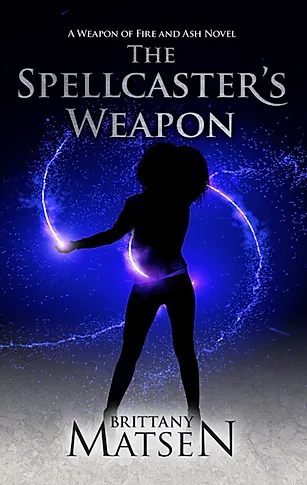 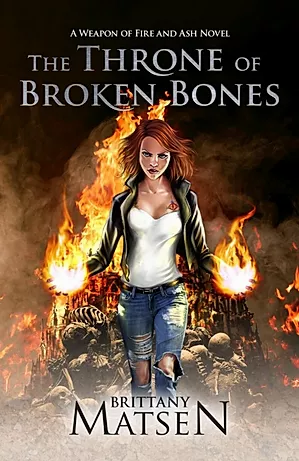 The balance between good and evil comes down to one girl.

But is the darkness really so bad?

All her life her mother lived with one foot out the door, but no more. That is, until Emma discovers she has the power to turn terrifying creatures of the night to ash with a single touch. That one moment unveils a hidden world of supernatural beings, both good and bad.

Suddenly her best friend is acting strange, the new guy that's mysteriously in every one of her classes is too beautiful to be human, and an ancient, powerful being is stalking her.

To top it off, the "good guys", the Giborim, aren't convinced that Emma can be trusted. But their unofficial leader, Blaze, becomes her unwilling protector--and perhaps something more--setting fire to millennia of hard-set prejudices.

Especially when her newfound power awakens a deep and dark hunger that can only be sated with death.

Welcome, Brittany! Thank you so much for taking the time to do this interview. Please tell us a bit about yourself.

Thanks so much, Natalie! To start, I am an American but have taken up residence in New Zealand for the past seven years and I’m really enjoying it.

What made you decide to become an author?

From a very young age I was enamoured with the art of storytelling. When I was about twelve I fell in love with reading, and shortly after (though perhaps naively so) decided I wanted to create stories too. I attended the Institute of Children’s Literature and focused my studies on literature. Once my son was born I put off my fears and decided to dive in!

When did you first start writing?

I can recall the first story I ever wrote at thirteen or fourteen years old, because my son is named after the main character: Noah Clapton.

Tell us a bit about The Mark of Fallen Flame and the series.

The Mark of Fallen Flame is the first in the Weapon of Fire and Ash series which centers around a girl gifted with both dark and light powers, but instead of the pure hero who always does what is right, I wanted a girl that felt a kindred spirit with another dark soul. She knows she should choose the light, but the power of the darkness is always calling to her. There’s witches, demons, angelic warriors and plenty of romance.

Where did the idea for the series come from?

In part, from a video game oddly enough. It was based on this idea of an elite society of warriors and this girl that didn’t fit in with them but desperately wanted to. After many, many years of dreaming about the characters and the world, it morphed into something else entirely.

What is one of your favorite elements of the series so far?

Honestly, I’ve loved the inclusion of magic and magical creatures. I had a different series idea for it, but I found it just organically fit in with the story I was already beginning to tell. The romance is also a favourite element. ;)

How long did it take for The Mark of Fallen Flame to go from idea to publication?

It was about five years in the making. There were mountains of half-written manuscripts. Years of toying with various pieces of the story until it all clicked into place. But once I set myself a deadline, there was an element of putting the pedal to the floor, so to speak.

You are amazing at writing bad boys, (I'm personally obsessed with Levaroth). Was there anything or anyone in particular that inspired his or Tlahaz's character?

Ahhhh, thank you! Levaroth’s character is unique in that, whenever he showed up in my head he was arrogant, snarky, and almost always shirtless. Ha ha! He was a mixture of all the book boyfriend’s I’ve read in the past decade while also truly being a bad guy at his core. So for every bad boy I write, they are a compilation of those that have come before him, however, I’ve always seen Levaroth as his own person.

Without spoiling anything for readers, can you tell is a bit about book three, A Throne of Broken Bones?

Oo! Tough question. There are a whole host of POVs that I hope readers will enjoy without feeling like you’re trying to watch thirty TVs all tuned to different channels at the same time. I will also say that this book was the most fun book I’ve ever written.

Emma and Adrianna both such strong characters! What was it like writing them?

They’re quite different characters, but both incredibly strong women in their own ways. Emma is more stoic and uptight, but to be fair, she has a lot to deal with. When I introduced Adrianna, I didn’t really like her. She’s vain and loud and a little self-centered, but later into the story I saw the pain she hides behind that loud personality and I fell in love with her. She’s sarcastic to a fault and maybe not as brave as Emma, but she’s so fun to write.

What character have you connected with the most while writing this series?

Levaroth, one-hundred percent! From the second he gets introduced on the page, I was in his head, able to delve into the deepest parts of him without looking like too much of a psychopath myself. I love his darkness. I love his possessiveness. I love how he craves the light and wants to be good, but ultimately would bathe in blood if given the option. He’s so complex and I love that.

What keeps you busy when you’re not writing?

My overfilled library and my rambunctious toddler!

What’s one piece of advice you would give to those who are aspiring authors themselves?

Take the time to learn your craft. Never turn away an opportunity to learn, and always take helpful criticism onboard. You’re never too old to learn a new trick. And read, read, read. They are your textbooks. Lastly, make writing time a priority. Put in the work and don’t give up.

Before you go, I have to ask, do you have any other books in the works?

I have several projects I’m switching between. Obviously The Crown of Shattered Souls, which is the final book in the Weapon of Fire and Ash series, but there are new ideas I’m cultivating. Whichever catches fire first will be the next series I write.

Where can people find you online?

Thank you so much to Brittany for taking the time to do this interview. If you're interested in learning more about Brittany check her out at any of the links above. You can find her books here.

A Secret About Misha